In order to provide you with services and offers tailored to your interests, Barnes
uses cookies. By continuing to browse the site , you accept their use. Read more
I agree
Back to list

This splendid flat is located at Aragon St. in Barcelona, in a Noucentiste building which dates back to 1.936.

The flat is situated on the fourth floor of a building with lift and one flat per floor and a terrace on the back. East Oriented to Aragon Street with sun on the mornings and a quiet backyard.

Currently the flat is to be renovated, so you can participate in distribution and finishes. The photographs that appear here correspond to an apartment of the same type and surface already renovated and sold, located on a lower floor of the same building.

The flat is located on the first floor of a narrow building between two other buildings. The building, conditioned by the characteristics of the plot, is clearly developed in the longitudinal axis, giving rise to housing with two clearly differentiated areas - corresponding to each facade - and intermediate spaces that rest on two inner courtyards.

Built during the 1930s, the building has a total of nine floors (Ground Floor + 8). This height, above the usual in the Eixample district, is determined by the greater amplitude of the street Aragón. On this street, the main façade is projected, which despite being just over 4 meters wide, stands out for its formalization in overlapping semicircular galleries, culminating with a dome topped with a needle. Of Noucentiste style, the lines of forged with subtle moldings are remarked, and the windows are crowned in the form of a semicircular arch. Although the width of the building conditions the zone of the flats, on the other hand it also allows knocking down the interior walls due to they have not structural function. The metallic beams that support the “Catalan Volt” rest directly on the party walls and in the stairwell, thus giving rise to infinity interior wall configurations.

Taking into account the orientation in the southeast-northeast axis, as well as the existence of a terrace accessible to the interior of the block, it is proposed to distribute the home in two distinct halves: a large daytime area, facing the main façade, which contains living area, dining room and kitchen, and a night area reserved for the interior, looking for the tranquility of the courtyard and leaning on the inner courtyards of the building. A continuous wall of solid billet, transverse, across the whole house, relegates and gives continuity to both areas. 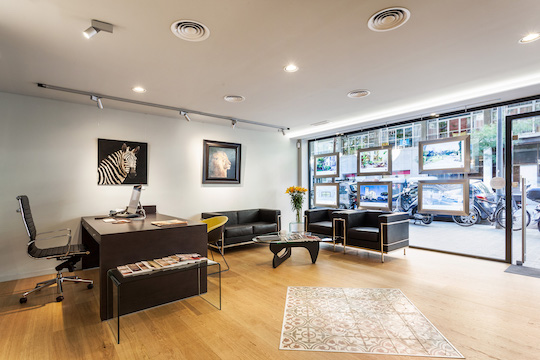 THESE PROPERTIES MAY INTEREST YOU